Current ventilation guidelines not sufficient in the fight against Corona

One of the research rooms in the SenseLab is designed as a classroom in the one and a half meter society, with tables at a good distance from each other. Images of a head surrounded by small particles appear on a screen at the front of the classroom. It is the head of professor of the indoor environment Philomena Bluyssen, who leads the research into corona and ventilation. Sitting at one of the tables, she is her own test subject. Not because the experiment entails risks – innocent soap bubbles are used – but more because keeping a distance remains important in this lab.

Keeping distance, along with hand hygiene, is one of the pillars in the fight against the spread of the coronavirus. After all, the WHO and RIVM assume that the virus is spread in two ways: via saliva droplets that infected people spread while coughing or sneezing and via contaminated surfaces that you touch with your hands. However, Professor Bluyssen and many other scientists are convinced that there is an important third infection route: via microscopic saliva droplets, aerosols, which can remain in the air for a long time. “We know from previous research into the MERS and SARS viruses that aerosols play a role,” she says. “As long as we are not sure that this is not the case for COVID-19, we should at least make sure that we keep the risk as small as possible.” 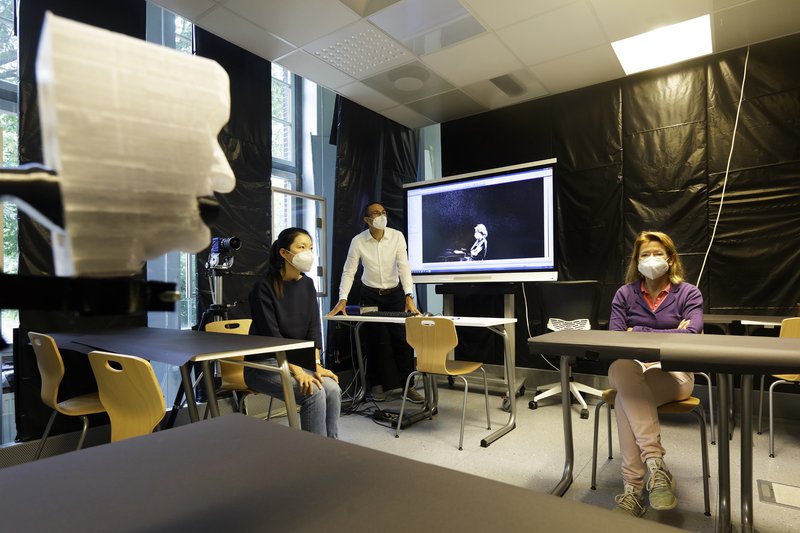 In April, Bluyssen was already part of a group of 36 scientists from around the world who tried to convince the WHO of the risk of this third infection route. Bluyssen is also one of the 239 signatories ofa second open letter to WHO which was published on July 4. The message seems to be getting through slowly. Where does that blind spot come from? “On the one hand, because the WHO, like the Dutch OMT, mainly consists of doctors. They look at situations such as intubations or operations in which virus particles are released; they understand the risks involved. They are just not physicists who understand the transport of particles, or engineers who have a feel for ventilation systems,” Bluyssen explains. “On the other hand, if the WHO recognizes that this risk is there, it means quite a bit for countries where they don't have the resources for proper ventilation.”

The tide is now turning at European level. The European Center for Disease Prevention and Control (ECDC) released a report at the end of June advising work on ventilation in indoor spaces. Germany and Belgium, among others, are going along with this, but the RIVM and the OMT are still very reluctant in our country. “They maintain that our current ventilation guidelines, as included in the Building Decree, are sufficient. This shows that they have not really delved into the matter: those guidelines are minimum values ​​based on CO2 concentrations from the exhalation of people present, but have nothing to do with health.” Bluyssen should know. After all, she has been studying the relationship between indoor air quality and health for years, including the risks of poor ventilation and the presence of toxins such as formaldehyde from paint and furniture.

Since the outbreak of the coronavirus, she has focused on the spread of aerosols indoors and the measures you could take to minimize this spread. At TU Delft she does this together with professor Fulvio Scarano (Faculty of Aerospace Engineering). Outside of that with a group of 36 scientists, and with a group that calls itself Beyond 1.5m Science (Christophe Hermans of NLR/DNW, Henk Jan Holterman of Wageningen University, Paul Scheepers of Radboudumc and Atze Boerstra of BBA Indoor Environment). With her research she wants to make visible how this spread takes place and thereby convince the skeptics. “When we started it was very controversial to say anything about air transmission. We shouldn't talk about that, because the OMT and RIVM were absolutely not behind it," she says. A few months later, part of its mission was completed: the images from the experiments in the SenseLab clearly show how small particles from the air we exhale can travel much further than one and a half metres.

The necessary instruments for the experiments could be purchased with a donation from the TU Delft COVID-19 Response Fund. For this equipment, Bluyssen sought collaboration with professor of aerodynamics Fulvio Scarano, who developed a way of making air movements in wind tunnels visible using soap bubbles. Behind the scenes of the experimental classroom, Bluyssen shows the research installation. In addition to such a soap bubble maker from the wind tunnel, she also uses one of the ventilators that has been developed at the 3mE faculty. Air and bubbles are introduced into the room together and 'exhaled' through the head of a mannequin. With the help of the right lighting, these 'breath particles' become visible against the background of the black walls of the room. A camera takes about 1000 images per minute.

The way in which you ventilate can also play a role: “We are now also investigating exactly how these air flows run. Because if the air in a closed room passes other infected persons during ventilation, then you are just as far from home. So you have to look carefully at how you discharge air. This method of contamination was in any case demonstrated for eight people sitting at tables next to each other in a restaurant in Guangzhou in January. When using fans, you can spread contaminated air in a room with several people in the same way, something the RIVM warned against during the heat at the end of June.

With mixed ventilation, fresh air comes out of the ceiling and air is extracted elsewhere in the room. With displacement ventilation, the fresh air comes from below, is heated by the body heat of people present in the room and then extracted from the top of the room. Bluyssen cannot yet say what the best form of ventilation is. “In principle, displacement ventilation is better, but if water molecules evaporate from the heavier droplets, they could float and end up with the next person. Then mixed ventilation with the right air flows would work well. That is what we want to investigate further.”

Bluyssen and her colleagues have already made a number of recommendations, including in this study. Ideally, they would also want to consider how much live virus can be in an aerosol in their advice. A grant application is being made for such a study in collaboration with, among others, an epidemiologist and a virologist. “Proving the presence of coronavirus in aerosols has been difficult until now, because by the time you are brought in as a researcher, you can no longer measure it in the air,” explains Bluyssen. “But particles that have not been removed eventually precipitate somewhere. We would therefore like to measure in schools in places that no one has touched, for example on top of cupboards.”

In anticipation of this, she will first investigate in the SenseLab where exactly aerosols land under different conditions. “We color water vapor with fluorescent paint so that we can make the particles visible with UV light. We're also going to try making drops of different sizes and then adding a kind of slime to them that mimics saliva. In this way, we want to see how those drops move and where they eventually land.” Tests were recently carried out into the leakage of mouth caps using the same method.

While her regular research is now on hold, this period also has positive sides. “Fortunately, I was able to do more than just keep the current business running from home,” says Bluyssen. “The media attention also brings awareness to my subject and the new collaborations that result are also inspiring.” She will soon be able to focus on developing a new research model for understanding the indoor environment in different scenarios – for example schools, offices and homes – and its effects on residents. There are also plenty of challenges post corona.